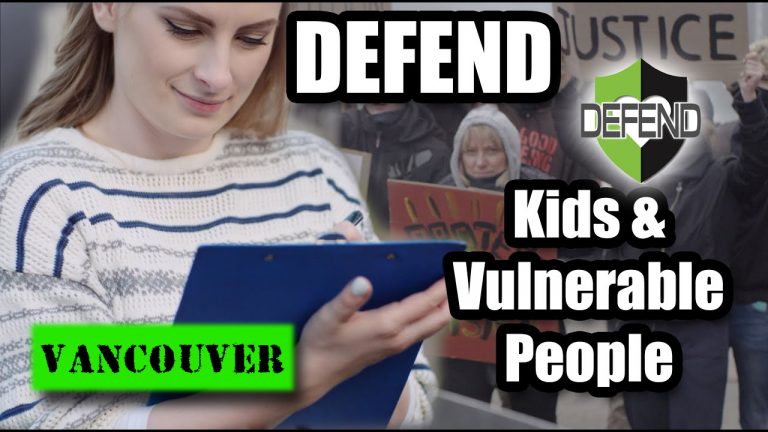 VANCOUVER, British Columbia – September 29, 2021 – DEFEND, a volunteer-run not-for-profit aims to reduce risks for children and vulnerable people online by education and advocacy. DEFEND volunteers in Vancouver from our teams are holding a rally to protect children and vulnerable people. The volunteers are gathering signatures on a hard copy petition that is to be served to the federal government in the coming months. DEFEND’s petition calls for legislative changes to happen, and for ALL social media sites to have age/ID verification for every user. Rana, a local DEFEND volunteer from Metro Vancouver, says she is motivated by the organization because she wants to stop online predators “DEFEND has opened my eyes to these kinds of risks online, no other organization in Canada is working on this issue, to protect kids online. I love to be part of a change in the world, and everything is about childhood.”

A tour to gather signatures in several major Canadian cities will roll out starting in Vancouver and heading to the east coast. DEFEND wants Vancouver to speak up about the issues and sign the petition because in 2020 Facebook alone had 20,307,216 reports of child abuse.

DEFEND volunteers will be on hand gathering signatures at:

●     Educate parents, kids and the general public about a variety of online risks

Currently, DEFEND is run by more than 60 professionals across the world. Some are parents, who are very concerned about their children’s safety using social media. “I am not a parent,” adds DEFEND volunteer Rana, “That doesn’t mean I can’t advocate for what’s right.  Unfortunately, there is a dark side to the internet, particularly social media. While as adults, we can handle this to a degree, what about our children? How do we protect them and teach them to stay safe when they use social media? It’s important to remember that social media wasn’t designed for children.” Others are family members or friends of highly vulnerable people who take an interest in protecting those who are potential targets.

To be proactive, DEFEND is currently working with their Tech Team to develop a new social media platform called 65square which will have age and ID verification built-in from the ground up in case the petition fails. 65square developers believe safety is a priority, more information can be found on Youtube.

Romaine B., Chair of DEFEND